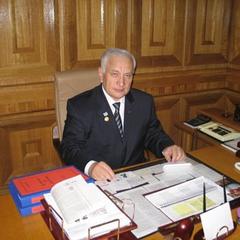 Information about scientific, educational and social activities of academician Murat Zh. ZHURINOV, president of the National academy of sciences of the Republic of Kazakhstan, Doctor of Chemistry,

After graduating from the Kazakh chemical-technological institute (now -. South-Kazakhstan State University named after M. Auezov) M. Zhurinov worked as a teacher in KazCTI (1964-1966). Then he entered the full-time postgraduate study of the Dmitry Mendeleev Moscow Institute of Chemical Technology (University of Chemical Technology of Russia) (1967-1970) and in January 1970 he defended his Candidate's dissertation. Then he worked as a senior lecturer, head of department, dean in KazCTI (1970-1982). In 1981 in Moscow he defended his doctoral thesis, in the same year was awarded the degree of Doctor of Sciences and the title of professor. Since 1982 he worked as prorector of Karaganda State University, Director of the Institute of Organic Synthesis and Coal Chemistry of the Academy of Sciences of the Kazakh SSR (1985-1991), Rector of the Yassaui Turkestan State University (1991-1995), the Minister of Education of the Republic of Kazakhstan (1995-1997), president of the International Kazakh-Turkish University named after H.A. Yassaui (1997-2001).

From 2001 to 2007, from 2013 to the present -. General Director of "D.V. Sokolskiy Institute of Fuel, Catalysis and Electrochemistry". From October 2003 to present - president of NAS RK. He worked as prorector for science of the Kazakh-British Technical University (2010-2014), and in 2016 he was elected as a Chairman of Board of Directors of the Kazakh National Research Technical University named after K.I. Satpayev (on a voluntary basis).

In Kazakhstan, he created a new research direction to study the electrochemical properties of the different classes of organic compounds and electrosynthesis of biologically active substances based on natural compounds. He researched on electrochemical behavior of different classes of organic compounds and developed new methods of electrochemical synthesis of known drugs, as well as new physiologically active substances. Deep and comprehensive approach to study the electrochemical properties of alkaloids on solid electrodes, also preparative electrosynthesis on their basis of new pharmacologically active substances by appending to molecules of the analyte of various functional groups (hydroxyl, methoxyl, ethoxyl, etc.) in combination with quantum-chemical calculations, mathematical optimization of processes and pharmacological control of received products of electrolysis allowed to solve a number of important theoretical and technological problems. For the first time it was established the mechanisms occurring at the same electrochemical reactions with the use of modern current-voltage, spectral and quantum-chemical research methods. The technology was carried out and the plant for electrosynthesis of target products (opianic acid, pachycarpine, derivatives of aphylline, salsoline, solasodine, etc.) was created.

M. Zhurinov developed technology of electrophoretic extraction of alkaloids and steroids from vegetable raw materials in a weak electrolyte solution. He successfully conducted pilot tests on the installation of Shymkent Chemical-Pharmaceutical Plant (1979). New methods of obtaining and manufacturing technology of phosphide of copper, iron and cobalt have also been developed which are of interest to the defense industry. Together with the students they created an original electrochemical methods of producing ultrafine nanocrystalline metal powders, one of which (copper powder) was given the name of the authors (Baeshov-Zhurinov method, AS number 1441833, 1989). He was awarded the medal "Inventor of the USSR".

Under the guidance of academician M. Zhurinov it was carried out the technology of sewage and waste water treatment method in flow-through electrolyzer with a flow lump electrodes representing a scrap with alternating current of different frequencies. The methods of anodic dissolution of considered electrochemically insoluble metals -.titanium, aluminum, etc. At the same time it was discovered a new phenomenon - postelectrolytic autodissolution of these metals, ie, titanium (or other easily passivative) electrode continues to dissolve after switching off the anode of the power source. Such a process is found for the first time in the world (discovery!).

M. Zhurinov developed original electrochemical methods of processing by-products and wastes of phosphoric industry - ferrophosphorus and phosphorus sludge. it was developed and implemented in the production the technology of electrochemical dissolution of ferrophosphorus in industrial electrolyzers with bipolar electrodes. With that it was obtained iron phosphate used in the rubber industry, as well as tungsten, molybdenum and vanadium, which are assessed as alloying elements in the production of stainless steel. He created highly industrial facilities for continuous processing of phosphate sludge to yield pure phosphorus and copper phosphide. These methods have been patented in the United States, Germany, Britain and other foreign countries. The individual results were implemented into production with a large economic effect.

M. Zhurinov is one of the recognized by world community leading scientists in the field of electrochemistry, has over 750 scientific papers published in domestic and foreign issues, including 17 monographs, about 120 patents. His individual works have been patented in the United States, Britain, Japan and others. Under his supervision there are 40 candidates and PhD-doctors, six doctors of sciences, three of whom are elected as members of NAS RK.

In 2003 academician M. Zhurinov became the laureate of the State Prize of the Republic of Kazakhstan in the field of science, technology and education. He was elected as a deputy of the regional maslikhat of Karaganda and South Kazakhstan regions, and the Chairman of the Standing Commission, the first chairman of the Maslikhat of South Kazakhstan region of Kazakhstan. He was awarded "Parasat" (2005), «Barys» of the III degree (2011) and medals of the Republic of Kazakhstan, diplomas of All-Union and republican authorities and international awards (Ankara, 2001). For outstanding achievements in science he was awarded gold medals of Research and Production Society of France (Paris, 2003), the Scientific Society "Golden Fortune" at the NAS of Ukraine (Kyiv, 2005), a medal "Knight of Science and Art" of the Russian Academy of Natural Sciences and the Order of "Mind, honor and valor" of the Russian Federation (Moscow, 2013). He is an honorary professor at Georgetown (USA), professor emeritus of Tokyo (Japan) and other universities: Al-Farabi KazNU, K.I.Satpayev KazNRTU, E. Buketov KarSU, KarSTU, M.Auezov SKSU, Yassavi IKTU, et al., academician of many International academies of sciences.

Since 2003, as a result of alternative elections by secret ballot, he was elected as a president of NAS RK. During this time, National academy of sciences of the Republic of Kazakhstan, having risen on a new path of transition from the Soviet model on the Western European model of functioning of academy of sciences, was the first in the CIS achieving recognition in the new status of the world scientific community, becoming a member of all major academic associations. Two of them elected M. Znurinov as president and vice-president (Union of National Academy of Sciences of the Turkic world and the AAS of OIC). This opens up opportunities for cooperation of scientists with leading foreign scientific centers. Under his leadership, NAS RK prepares an annual National Report on science and publishes it after approval of SSTC under the Government and the Administration of the President of Kazakhstan. NAS RK also publishes 8 academic journals (since 1946), which are delivered to the national library of 73 leading countries of the world and are included in Elsevier Scopus database, being the most prestigious journals in Central Asia.

Since 1985, M. Zhurinov served as the first head of the various institutions and government bodies (director, rector, minister, president). At all locations colleagues note his immense capacity for work, fairness, competence, integrity and ease of communication.