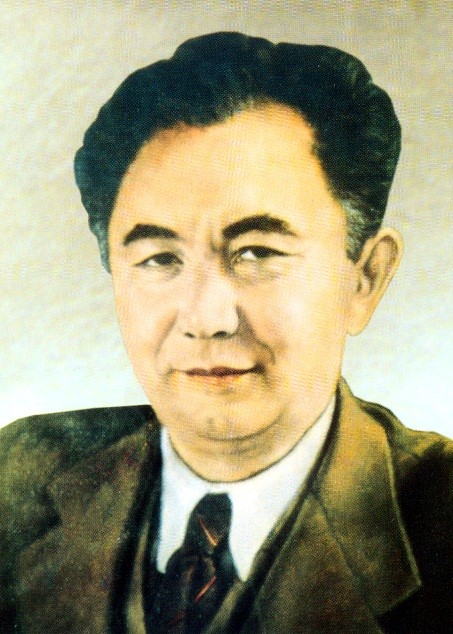 Kanysh Imantaevich Satpayev (1899-1964), an outstanding geologist and Kazakh public figure, Doctor of geological and mineralogical sciences (1942), academician of the USSR AS and the Kazakh SSR AS (1946), founder and first president of the Kazakh SSR Academy of sciences, permanent director of the Institute of geological sciences, the founder of the Kazakhstani school of geologists-metallogenists. He graduated from Tomsk institute of technology (1926). Geological engineer, head of dep., head of the Atbasar, Karsakpay geological trusts (1926-1941), Deputy chairman (1941-1942), chairman of the Presidium of the Kazakh branch of the USSR AS (1942-1946), president of the Kazakh SSR AS (1946-1952, 1955-1964), director of the Institute of geological sciences of the USSR KazFAS from 1941, of the Academy of Sciences of the Kazakh SSR since 1946. The distinctive feature of the activities of K.I. Satpaev as the president - an inextricable link between science and production, integrated research, economical expediency. He worked on geology of ore deposits and mineral resources of Kazakhstan, development of principles and methods for the predictive metallogenic maps of minerals.

One of the creators of metallogenic science and founder of the Kazakhstani school of metallogeny. He has made a significant contribution to the development of Dzhezkazgan copper deposit. During the Great Patriotic War he was a member of the Commission of the USSR AS of resource mobilization of Ural, Western Siberia and Kazakhstan on defense. With his name it is associated with the study and disclosure of mineral resources of Kazakhstan, an organization of wide integrated metallogenic studies to quickly identify new mineral deposits and expand the mineral base of the country. At the basis of metallogenic studies formed by K.I. Satpaev there are principles and methods of preparation of forecasting metallogenic maps, he developed a complex method of metallogenic analysis of the provisions on many issues of the theory of mineralization and prognosis of deposits. On his initiative, there were studied mineral resources of Mangyshlak, Mugodzhar and Turgai. He was repeatedly elected as deputy of the Supreme Council of the Republic and the Supreme Soviet of the USSR. His name is after Institute of geo-logical sciences, schools, streets, JSC "Dzhezkazgantsvetmet", mineral, small planet, city. He was awarded with orders and medals. Laureate of the State Prize of the USSR (1942) and the Lenin Prize (1958).

Comp.: Zhezkazgan copper ore area and its mineral resources. 1932; Mineral resources of Kazakhstan and their development over 20 years. 1941; Ore deposits of Dzhezkazgan region of the Kazakh SSR. 1942; Complex metallogenic forecast maps of Central Kazakhstan: principles and methods of preparation, content and main results of the implementation in practice of prospecting and exploration. 1958; Selected works. In 5 V. 1967-1970.