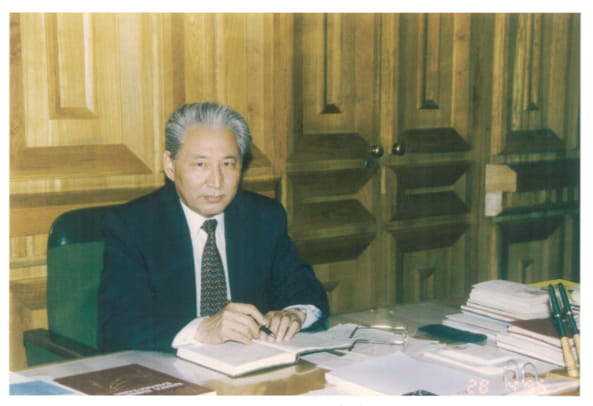 Academician Sagadiev K.A. has background  in  Economics and Management of national economy. Graduated from S.M. Kirov Kazakh State University and awarded diploma with distinction (1960); aspirantura (1966) and doctoral programme (1976) at the Moscow Institute of National Economy named after G.V. Plekhanov. Candidate of Economic Sciences (1966);  Docent (1967); Doctor of Economic Sciences (1977); Full Professor (1978). Decorated by honorary  title “Distinguished Figure of Science and Technology of the Republic of Kazakhstan” (1998).

Elected to foreign Academies of Sciences and Societies: Association of American Scientists (AAA) -1994; New York Academy of Sciences (USA) -1996; full member (academician) of the International Academy of Higher Education - 1997; Full Member of the Pakistan Academy of Sciences – 1998; Decorated the title "Person of the Year" by Cambridge Biographical Society -1992.

He started  his work as a lecturer  of the Economics chair  of Kazakh State University named after S.M. Kirov, serving at various  academic  and administrative positions throughout  career  to being appointed  Rector in the number universities  in Kazakhstan (Tselinograd Agricultural Institute -1982-1990; Kazakh State Academy of Management -1992-1994; Kazakh National Agrarian University -1996-2001; University of International Business -2002-2004 and 2011-2020; International University of Information Technologies -2015-2018) and elected President of the National Academy of Sciences (1994-1996).  Contributed to the legislative system being Deputy of the Mazhilis of the Parliament of the Republic of Kazakhstan of the 3rd (2004-2007) and 4th (2007-2011) convocations and Chairman of the Mazhilis Committee on Finance and Budget (2004-2007). Appointed  Chairman of the Board of Directors of the National Agency for Technological Development (2012-2014).

Heading the Academy  of Sciences in the transitive years  to the  market economy in 1994-1996  President K.A. Sagadiev made the significant input in its development,  displaying his  remarkable  abilities  of the  proficient  executive.  To tackle the facing  challenges he launched the pivotal  reforms of  the leading national scientific  institution  aimed   to   pursue new strategic priorities , search for the optimal mechanisms and the diversification of the sources for  funding the scientific researches in the realities of the  market economy, the collaboration with the world class research centers abroad.

In 1994 on the initiative of  the President of the Academy   K.A. Sagadiev  the UN Expert Commission made  assessment  of the capacities of the 21 leading  research institutes of  the NAS RK and  substantiated   their  accomplishments and sound potential of the sciences  in the country due to  the advancement of the  competitive research methodologies and the modern technologies, notably  in the number of the sciences areas   such as the  ferrous and non-ferrous metallurgy , biotechnology, natural sciences, geology.

The systemic efforts on reforming the  Academy under the direction  of President K.A. Sagadiev brought visible outcomes and resulted  in the grown efficiency due to the consolidation of available financial, human and technological resources on 9 fundamental and 15 applied  research areas. The elaborated list of 184 perspective  technologies was developed, out of them 7 are the world-class ones, classified as of  the "new economy" category.

The  aim to  increase the commercialization results of  the researches of the scientists of the NAS RK in some  areas of the fundamental and the applied sciences that have significant potential was being resolved, among them are the  technology for the processing of sulfide lead concentrates, patented in 14 countries for industrial production, including - Germany, Italy, Canada , China and Bolivia, the  unique wedge-free technology of directional drilling of deep and ultra-deep wells, a number of unique new processes and equipments, in particular the KIVCET-TsS for melting lead-zinc raw materials,  the melting copper concentrates in a liquid bath, the  new technology for producing alumina, the completely new technology of production of such rare metals like rhenium and gallium, the composites production, the fiber optic technologies, the phytochemistry (arglabin) and others.

During the Presidency of Academician K.A. Sagadiev the integration into the international academic  networks and collaboration with the foreign research  centers and foundations acquired the particular relevance, as a result  just within  two years (1994-1995) the NAS RK scientists received the grants for funding their studies as of 3.2 million dollars from the sources abroad. To promote  the NAS RK as a key academic institution of the country abroad the achievements and capabilities were presented at the different events -conferences, simposia and  exhibitions in the United States, a number of European (Germany, France) and Asian (Japan, China) states.

A notable contribution  of the President of the NAS RK K.A. Sagadiev is the accumulation  and the enhancement of the quality of the human capital of the Kazakhstani science   . On his initiative  the  structural reorganization was undertaken in the Academy aimed at creating modern research institutes and centers in relevant scientific areas (Institute of Oriental Studies, Institute of Phytochemistry, Regional branches), the renewal  and the considerable rejuvenation, almost by a third, of the membership  of the NAS RK, so thus   opening the way in science to many young talented  scientists and researchers.

During the Chairmanship in Finance and Budget Committee of the Mazhilis of the Parliament of the RK, Academician K.A. Sagadiev played essential role in examining and shaping  laws and challenging  the work of government on numerous agenda, namely the development of  the methodology of the public  budget planning in the Republic of Kazakhstan, the tax reform, the elaboration of the  efficient mechanisms for the national  economy diversification and improvement of  the competitiveness  in the global economy, the rational use  of the National Fund  enabling the long-term benefits for the future generations, the role and impact and accountability of the development institutions of the Republic of Kazakhstan,  modernization of the management in  the  education and science  areas and others.

During his work in Majilis, Academician K.A. Sagadiev addressed  around  50 inquiries to the government of the RK on a wide range of  issues such as  the tax burden on the real sector of the economy, the social quarantee of students, the  stock market development in Kazakhstan, the road construction, the foreign investments attraction, effectiveness of  the oil assets privatization, the hemophilia patients, the migration policy, the agro-industrial sector.

Academician K.A.Sagadiev built up his scientific school where  educated the  solid  academic cohort encompassing  his numerous  successors. Accomplished with  his supervision dissertations for academic degrees  amounted to  21 Doctors and  45 Candidates of Economic Sciences and 15 PhDs.

Author of more than 180 scientific publications, of which 20 monographs.