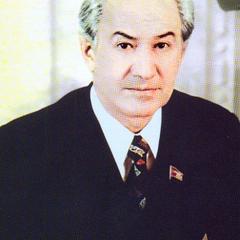 Askar Minliahmedovich Kunayev (1929-1999), metallurgist, Doctor of Engineering sciences (1970), professor (1970), academician of the Russian academy of sciences (1981), academician of AS of the KazSSR (1972), Honored scientist of the Kazakh SSR (1977). He graduated from the Moscow Institute of steel and alloys (1951). Steel making, master, shift chief in the Temirtau steel plant (1951-1953), head laboratory fellow, head researcher, Head. lab. (1953-1970), director of the Institute of metallurgy and enrichment of KazSSR (1970-1988), Vice-President (1972-1974), president of the AS of the Kazakh SSR (1974-1986), since 1996 Honorary Director of the Institute of metallurgy and enrichment. As president of the Academy of Sciences he looked for new ways to develop science, improve the structure of academic institutions, the formation of new promising areas, implementation of research results, patent and license activation job. Network of scientific institutions of the Academy have been developed, it was organized the first Regional Research Center - Central Department of Kazakhstan (Karaganda). Scientific researches focused on the development of basic physical and chemical fundamentals of metallurgical processes, the creation of new technological schemes and devices for processing of metallurgical raw materials. He was engaged in the development of complex use of complicated refractory mineral raw materials, production of alloying metals, rare metal processing of high-silicon off-balance and phosphate ores. Winner of USSR State Prize (1978, 1984) and the Kazakh SSR (1972, 1982). He was awarded with orders and medals.