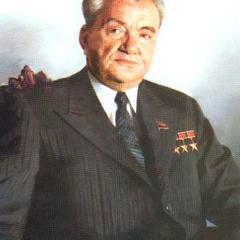 Dinmukhamed Akhmedovich Konayev (1912-1993), mining scientists, state and public figure, Doctor of Engineering sciences (1963), academician of AS of the KazSSR (1952). He graduated from the Moscow Institute of Nonferrous Metals and Gold (1936), worked as a driver of the drilling rig, master, shift engineer, head of branch, Ch. engineer, director of the Kounrad mine of Balkhash copper plant, Deputy. Ch. engineer and head of the technical department of "Altaypolimetall" plant, director of Ridder mine of Leninogorsk mining administration (1936-1942), deputy chairman of the Council of People's Commissars of the KazSSR (1942-1946), deputy chairman of the Council of Ministers of the Kazakh SSR (1946-1952), president of AS of the KazSSR (1952-1955), deputy chairman of the Council of Ministers of the Kazakh SSR (1955-1960, 1962-1964), first secretary of the Communist Party of Kazakhstan (1960-1962, 1964-1986). Under his leadership, the Academy of Sciences carried out important measures to improve the scientific and organizational work, strengthening the link between science and production, strengthening human resources, the development of the most important scientific research concentration of scientific forces and material resources in the development of complex problems of development of the productive forces and culture of the people of Kazakhstan. His scientific works were devoted to various aspects of the theory and practice of surface mining. He researched and introduced efficient methods of breaking the ore in open pits, then described in the monograph "Blasting work in Kounrad mine." He has published about 200 scientific and journalistic works. Three times Hero of Socialistic Labor. He was awarded with orders and medals, won the highest awards of a number of foreign countries. There are undeniable merits of D.A. Konayev to the multinational people of Kazakhstan in the development of economy, social sphere, science and national culture.

Comp.: Development of Kounrad deposits of copper ore, 1949; Research the possibility of transition from underground mining to open pit mining at Mirgalimsai field of lead-zinc ores, 1950; Development of the open pit mining in Kazakhstan, 1964; Kazakh SSR: A brief historical and economic essay, 1958; Fav. speeches and articles, 1978; Soviet Kazakhstan, 1980; Scientific and technical basis of electrification of mining machinery in the mines, 1985.