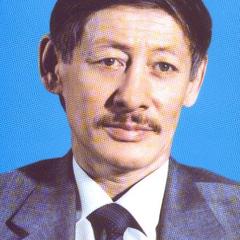 Aitkhozhin Murat Abenovich (1939-1987), an expert in the field of molecular biology, biochemistry and biotechnology, Doctor of Biological sciences (1977), Professor (1980), academician of the AS of the Kazakh SSR (1983). He graduated from the Kazakh state university (1962) and traineeship of Moscow state university (1962-1965). junior., senior researcher (1965-1969), head of laboratory (1969-1983), director of the Institute of Botany (1978-1983), director of the Institute of Molecular Biology and Biochemistry (1983-1987), president of the AS of the Kazakh SSR (1986-1987). The founder of molecular biology and biotechnology in Kazakhstan. One of the first in the world of science he conducted a comparative study of albumen synthesised device in higher organisms. He researched and studied the physicochemical properties of informosomes in plant cells; opened all classes of informosomes of plants - free cytoplasmic, and nuclear polysome-connected, including RNA-binding proteins. He also studied synthesis of informosomes when ripe and germination of wheat. He conducted original experiments to create and study hybrid ribosomes, having functional activity and consisting of subunits of animal and plant cells. In subsequent years, these studies have contributed to the plant mRNA translational control study of the mechanisms of protein synthesis. He studied the physicochemical properties of the informosomes proteins, influence of phytohormone on protein biosynthesis at the translational level, the biogenesis of mRNA. M. Aitkhozhin paid more attention to nuclear RNP particles containing precursor mRNA, small nuclear RNA, regulation of protein synthesis at the level of initiation, molecular biological and biochemical aspects of plant resistance to the action of stress factors, such as heat shock. He gave an important role to the scientific instrument making and automation of scientific research. Under his leadership, it was developed a set of instruments for the automation of molecular biological experiments, which is protected by 15 copyright certificates and 16 patents in the leading countries of the world. Under his leadership in 1983 it was organized the Institute of Molecular Biology and Biochemistry of the Academy of Sciences of the Kazakh SSR. For the first time it was  introduced the course of molecular biology and a number of special courses for students of Biological faculty. As president of the AS of the KazSSR, he promoted academic research output in the current frontiers of science and technology. Particular attention was paid to the need for the participation of the academic institutions of the country in a variety of scientific and technical complexes, scientific and technical associations and engineering centers in international assignments and the Union target scientific and technical programs. First steps were taken to restructure the management of the Academy. Winner of the Lenin Prize for his work "The opening informosome - a new class of intracellular particles." He was included in the Golden Book of Honor of the Kazakh SSR (1974), awarded with the medals.