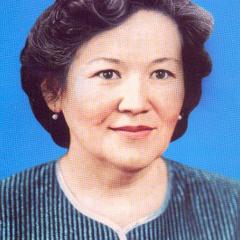 Aitkhozhina Nagima Abenovna (1946) - Doctor of Biological sciences (1990), professor (1995), academician of NAS RK (2003). She graduated from the Kazakh state university named after Kirov (1969), post-graduate course of the Institute of Molecular Biology named after V.A. Engelhardt of the AS USSR, Moscow (1973). There she defended her doctoral dissertation (1990). From 1973 - junior, senior researcher at the Institute of Botany of AS of the KazSSR, the Institute of Molecular Biology and Biochemistry of AS of the KazSSR (1983-1989). Director of the Institute of Molecular Biology and Biochemistry named after M.A. Aitkhozhin of NAS RK (1990). President of the National academy of sciences of the Republic of Kazakhstan (1999-2002). Director of the Institute of Molecular Biology and Biochemistry named after M.A. Aitkhozhin (present). Main research fields: molecular biology, molecular genetics, medical genetics, biotechnology. It was obtained basic results of fundamental and applied values of structural and functional organization of the genome of higher organisms and the molecular mechanisms regulating its expression, molecular plant biotechnology and biomedicine, Ethnogenomics; It was first postulated and then proved experimentally scheme of biogenesis of RNA in the nuclei of eukaryotic cells, which has become the standard in molecular biology and formed the basis of the mechanism of RNA processing in higher organisms. The founder of the human molecular genetics and plant in Kazakhstan, organized the first genome of a laboratory and successfully conducting studies on the structural and functional features of genome organization in hereditary gene-mediated diseases atherogenic rights for biomedicine (genomics), molecular mechanisms of plant resistance to pathogens. For the first time in Kazakhstan under her scientific supervision it was carried out molecular genetic analysis of DNA from complex material unique archaeological discoveries of the steppe civilization (Berel, East Kazakhstan region), saved in conditions of artificial permafrost remains of men and horses that lived presumably 2.5 thousand. years ago and comparative analysis of DNA from different populations of Kazakhstan. These works laid the foundation for the development of research in the Republic of paleogenomcs and ethnogenomics, ethnogenesis and ethnic history of peoples. The practical result of her initiative, developed with the direct participation program of scientific experiments in space biology and biotechnology of astronauts T. Aubakirov, T. Musabaev and other expeditions aboard the space station "Mir" and International Space Station began 2 new potato varieties with increased resistance to drought and pathogens, one of which in 2003, zoned in Shymkent and Kyzylorda regions.

Author of over 250 scientific papers. Under her leadership, it were performed 2 doctoral and 14 master's theses, 4 candidates of sciences continue research works at universities in the US and the UK, becoming the citizens of these countries.